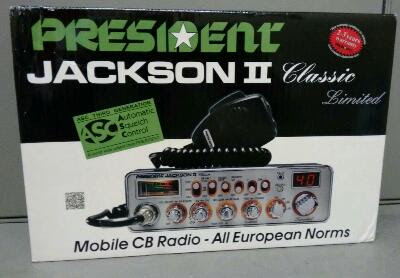 So Presidents flagship CB radio the Jackson 2 Chrome hit the shops in the past few days. I was lucky enough to get  my hands on one of the very first to become available. Having used it for a few days these are my initial findings based on the radio I have in my possession:

The radio looks gorgeous, with a style that takes you back to the 80's.

On closer inspection the 'chrome' controls actually look quite 'plasticy'. There is also some play on the controls. They wobble from side to side. The radio itself seems well built with a nice heat sink on the back (Hinting at a higher power output!). All the switches and controls are brightly backlit and the analogue S-Meter is clearly visible.

AM and FM incoming and outgoing audio is nothing short of excellent. The supplied standard microphone works very well. However SSB is a different story. In common with several of the newer radios (Most notably the President Lincoln 2) I found that the Jackson 2 Chrome suffers from  distortion on strong signals on SSB. You can reduce the RF Gain and this will clear up most of the distortion but if you are listening to say two stations talking, one of which is nearby and the other is a distant station you find yourself constantly having to raise and lower the RF gain to listen to the two stations.

The radio also appears to 'drift' slightly on the receive and occasional clarifier adjustments are needed.

Furthermore, the radio I have is slightly off frequency on transmit. I don't have a frequency counter to test this exactly but comparing it to several other radios (including amateur equipment) the Jackson 2 appeared to be approximately 300Hz low in frequency on both USB and LSB. Whilst not a massive amount this was enough to provoke several comments from other stations who were having to tune me in and is on the verge of being outside specifications!

All the SSB problems were still evident when the radio had been used for some time and was fully warmed up.

I tested the power output on my radio and found the following:

4 watts on AM/FM and 8 watts on SSB when the radio was in STANDARD mode.

13 watts on AM/FM and 18 watts on SSB when the radio was in EXPORT mode.

Therefore when in STANDARD mode the radio is bang on with the power output on AM and FM but considerably short of the allowed 12 watts on SSB.

One other disappointing thing is that when in STANDARD mode and operating in the UK setting the radio will only do FM, there is no access to AM or SSB on the mid band frequencies. The mode switch is used to switch the radio between UK40 and EU40 and has no effect on the operating mode. I realise that the UK CB radio market may be small but you'd think that some 15 months after AM and SSB were legalised in the UK radio manufactures would accommodate this into their new radios. 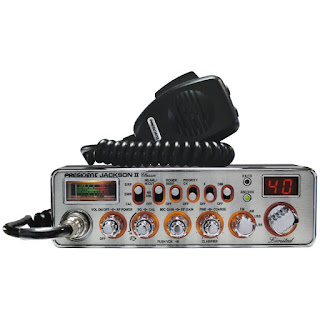 CONCLUSION: I had really high hopes for this radio and had been looking forward to getting my hands on one but I have to say that I feel rather disappointed. Sure the radio LOOKS fantastic but the SSB problems are unforgivable on a 'top of the range' CB radio and the loose, wobbly controls have no place on a top of the range radio. The lack of AM and SSB in the UK mode is another serious omission for UK operators.

If this radio retailed for £149 some of these problems could be dismissed but when you are paying £249 you expect something special and I feel that this radio comes nowhere close to being special!

Having previously faced much criticism over problems with the Lincoln 2 and the Grant 2 I was expecting more from President this time around but sadly it looks like they haven't learnt from their mistakes.