With the publication of ECC Decision (15)05 Europe finally gets a Pseudo-UHF CB Radio system on 446MHz. 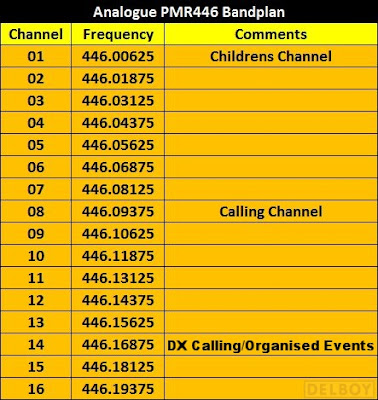 It has been suggested that Channel 14 (446.16875) should be used as calling frequency for those looking for long distance contacts, operating nets or operating on non-standard equipment to avoid interfering with casual users on the band.


For digital users there is now a choice of either 16 or 32 channels using DMR Tier 1 or dPMR: 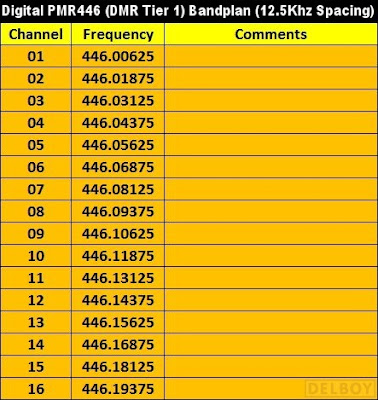 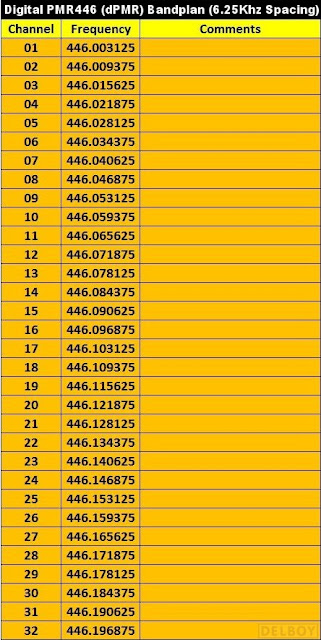 
The original decision was made in 2015: http://delboyonline.blogspot.co.uk/2015/07/new-pmr446-analogue-and-digital.html

Here in the UK, the new allocation was implemented in March 2018. 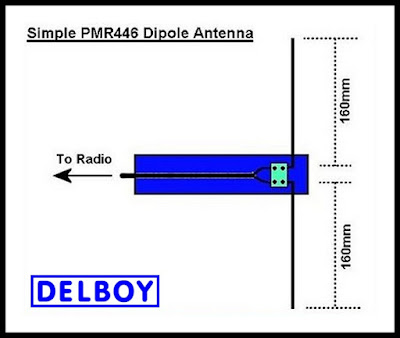 The 160mm dipole elements can be made from metal rods or just stiff wire (If supported on a wood, plastic or stiff cardboard frame).

They are connected to the coax cable using a "Choc-Block" connector. Which can be screwed or glued to a backing wood or plastic panel. Please take care to connect the inner of the coax to the top section and the coax outer braid to the bottom section of the antenna. The coax can be secured to the backing wood/plastic with clips or tape.

This antenna can be made in a matter of minutes and can be located in your loft (As high as possible) or outside if you make it waterproof with tape or by sealing the "Choc-Block" connected in a small plastic box.

Here is a design for a 446 Mhz band outside aerial with ground planes.

The whole assembly will fit into a piece of 1 inch/25mm plastic tube to allow it to be fitted to a mast, or other fixing. The plastic tube requires a few saw cuts down the top, so a jubilee clip can be tightened onto the coaxial PL259 plug. It is well worth using the better grades of low loss cable on the aerial. The aerial will be resonant about 446.2 MHz, but it would be worth checking with a VSWR meter before transmitting. I have used this design for years on 70cm band, and you will be surprised how well it works.

Brass brazing rod is really easy to solder, and easy to get. Hope you guys enjoy the 446 band.

4-Element Yagi Antenna for PMR446
Information supplied by Per, SM6ETH
Some people have replaced the fixed antenna on their PMR equipment with a coaxial connector which allows them to use external antennas instead. I will in the following describe a four element Yagi antenna I designed and built for the PMR band, it is a real low cost design and easy to put together. The goal was to make a design that require not to much experience and use of ordinary tools possible to find in almost every household, as an example, there is no need for a drilling machine.
The tools needed are as follow.
- Hammer
- Folding rule or equivalent
- Pencil
- Hacksaw
- Knife (to cut the coax cable)
- Soldering iron
- And a small amount of glue.
List of materials (All measurement in mm)

(RED Figures are IMPORTANT and MUST be accurate)

The antenna consist of a wood frame, see figure 1. The dimension used is not critical, I used two different dimension of wood strip, boom dimension is 21 x 15 and the four supports is 21 x 8. The frame is glued and nailed together. The supports shall be mounted in right angle to the boom, see figure 1 and 2.
When you are ready with the frame it has to be painted. It is necessary, because it have not to take up any moister which can affect the performance of the antenna. You can use a metallic boom instead, but in this design is it necessary to isolate all the antenna elements from the boom. 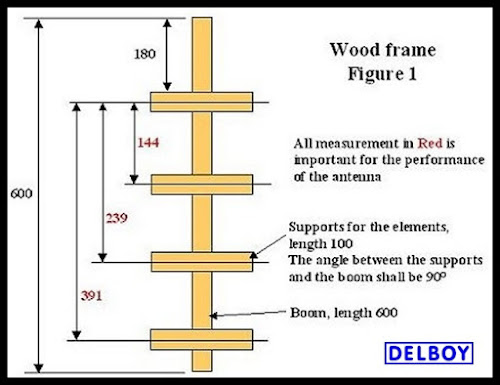 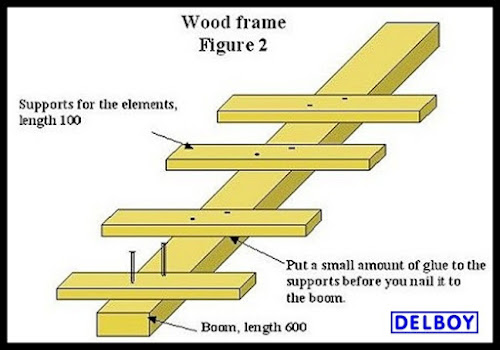 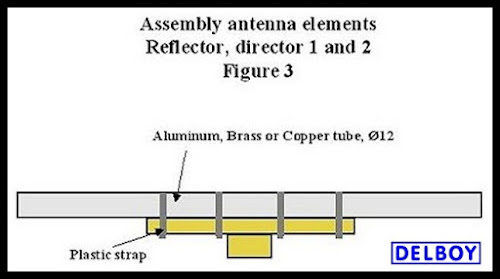 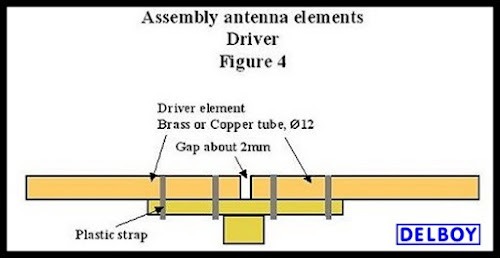 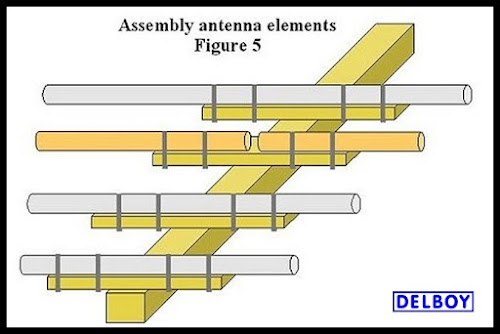 Soldering the coax cable:
In this text I will not describe how to split up a coax cable, you can find it some where else at the web.
IMPORTANT, do not forget to seal the coax cable after you have split it up, to avoid it to take up moister. Also the solder joints must be sealed, use epoxy, glue, paint or what else you have in house.
When you solder the coax cable to the two halves of the driver, heat up the tubes first, it takes some seconds for the brass tube to heat up. Apply a small amount of solder and let it melt before you solder the coax to the tubes. In figure 6 you can see the coax cable connected to the driver. 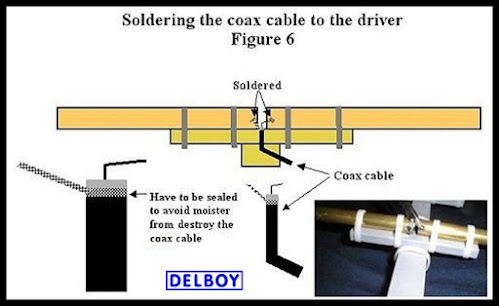 Antenna performance:
In figure 7 you can see the complete antenna. The performance of this antenna is rather good, wide bandwidth with a good match to 50 ohm coax. 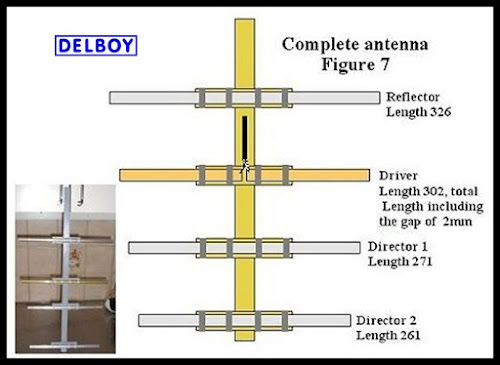 Conditions had been good all week and on the morning of 5th August 2003 I switched on my 2m/70cm radio to hear an abundance of German and Dutch stations. After making contact with several stations using as little as 1 watt I decided that this was the time to make an attempt at overseas contacts on PMR446.

I marched up to the top of our local pit heap here in Blyth, Northumberland and immediately heard several Dutch stations on channel 1. I gave out several calls giving my location and callsign without reply but suddenly the signals from the Dutch stations rose dramatically and I heard "OK, North East England, Yes very funny" from one of the Dutch stations.


I again repeated my callsign and stressed my location. The Dutch station then said "I don't believe it, are you really in North East England?"

I confirmed my location again. The reply was "This is amazing. This is the first time I have made a contact like this on these radios."

A ten minute conversation then took place and I learned that the station was in fact Chris who was located near Amsterdam at a distance of approximately 333 MILES (535.8 Km) - Distance confirmed on 07/08/2003 (See Below) 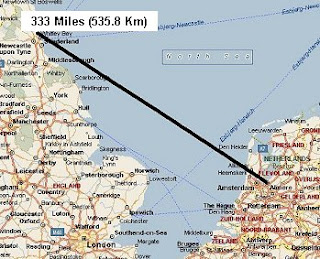 Looking at the map you can see how this contact was possible. The radio signal has a clear path from the North East coast of England to Amsterdam and the exceptional radio conditions made the contact quite easy.

UPDATE
Later the same day at 20:30 hours (BST) I again went to the top of the pit heap, this time with David (M0DAD) and we were both amazed to make contact again with Chris and his friend Jaap on channel 1.

This time our conversation lasted almost an hour with excellent signals reported at both ends. I was using my Motorola T6222 and David was using his Binatone 100 (Same as Goodman's Tracker Mk1). Another local station situated about half a mile from ourselves could hear Chris and Jaap but was unable to make the trip back.

Several other Dutch stations were heard during our conversation and even a German station !!!
David and I took turns talking to our Dutch friends and also took time to make several good DX contacts on 2m FM and SSB. We both agreed that the conditions were probably the best we had ever heard all across the VHF/UHF bands. I, myself had been listening to a German radio station all day in my car on 104.6 FM. The station is RTL-FM, located in Berlin.

Hi Delboy, you want our exact location for the distance. We are about 20 km near Amsterdam a town called Almere. That's the newest town of the Netherlands before Almere it was a sea but now it's made into land they called it the Flevopolder. It's in between Amsterdam and Utrecht, I think exactly in the middle of our country.

At the moment here it's about 30 degrees inside our house i am sweating a lot. I never have seen it so hot here in the Netherlands. Tomorow they say on the news its getting about 37 degrees.
I hope we can made this week another connection again. We are still waiting on the frequency. 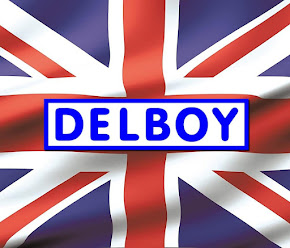