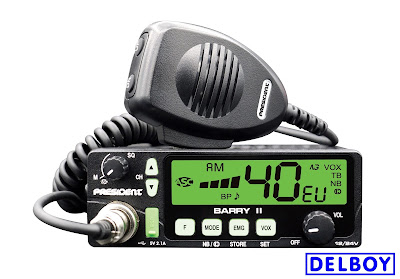 With the cost expected to be similar to the existing Barry.


Manual can be downloaded HERE
Posted by Delboy at 08:44 1 comment:

Video:YouTube/CQチャンネル!!
Fancy a look inside the new Icom IC-705? Well, this video is well worth a watch!
Posted by Delboy at 17:53 No comments: 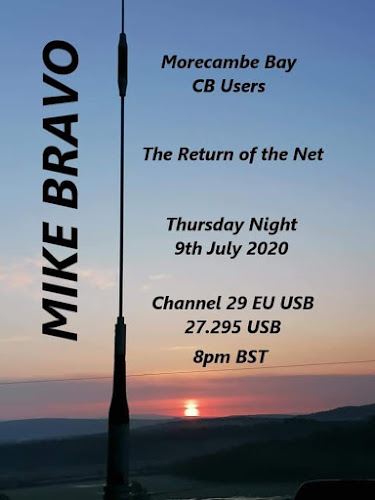 The COVID-19 situation has prevented many regular radio nets from taking place so it's great to see them gradually returning to the air. In this case it's the Morecambe Bay Net in the North West of England.
You can catch the guys tonight from 8pm (UK Time) on 27.295 USB.
Posted by Delboy at 10:33 No comments:

Video:YouTube/HamRadioConcepts
Taking a look at the new Digital/Analogue FTM-300D from Yaesu... 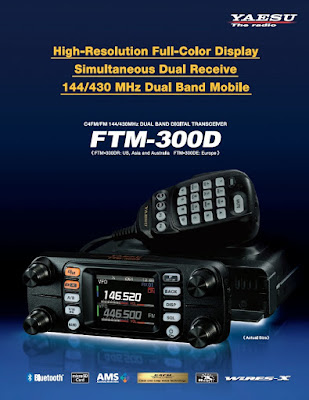 Here's a chance for you to win a brand new President McKinley EU.

Terms and conditions can be found via this link:CLICK HERE 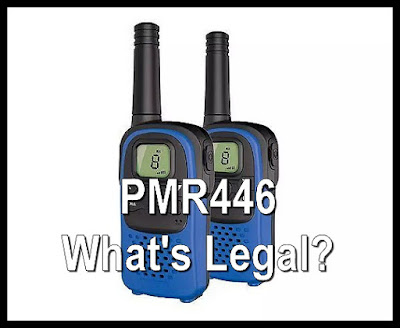 Sounds like a straight-forward question to answer doesn't it?

If you want to operate legally on the PMR446 band you require a type-approved radio which conforms to all of the relevant requirements and the easiest way of ensuring that you are legal is to buy a PMR446 radio from Argos, Curry's etc.

The main requirements for legal PMR446 radios are a maximum output power of 500mw ERP and a fixed antenna.... Or at least that's the way it started out!

OFCOM appear to have muddied the water a little in recent years and not for the first time there have been heated discussions online about what it and what isn't allowed.

The main point of contention is the 'Fixed Antenna' requirement. Do radios still need to have a fixed (non-removable) antenna in order for them to remain legal? Some people say YES and some people say NO.

The reason behind the disagreement is that there appears to be conflicting information on the OFCOM website.

PMR446 comes under 'license-exempt' rules and regulations. For equipment to be legal it is required to adhere to strict specifications in order that it operates in the way it is intended to do for it's purpose and does not cause any undue interference to other services or users. 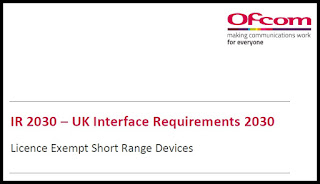 In the UK devices such as PMR446 are listed as 'license-exempt' in the OFCOM document IR 2030 – UK Interface Requirements 2030 - Licence Exempt Short Range Devices, dated MAY 2020, which states:

"PMR446 equipment is hand portable (no base station or repeater use) and uses integral antennas only in order to maximise sharing and minimise interference. PMR 446 equipment operates in short range peer-to-peer mode and shall be used neither as a part of infrastructure network nor as a repeater"

So, it's clear that PMR446 radios must have INTEGRAL antennas, in other words, the antenna must be fixed to the radio.....

Well, maybe not, as many people have pointed to another document from the OFCOM website is the "Analogue and Digital PMR446 Information Sheet", dated Feb 2018, which under a sub-heading of 'Converted Radio Equipment' states:

"PMR446 users are reminded that their radios are only licence-exempt if they are built and operated within the conditions of the exemption regulations. If modifications are made to the equipment, such as adding an antenna connector, the overall maximum ERP or other technical parameters must not exceed the permitted levels set out in the Interface Requirement"

So this is where the confusion arises. The second document appears to suggest that you may be able to use non-standard equipment or modify equipment as long as the operating characteristics of the radios remain within the relevant specifications, the most important being that the radio output power does not exceed 500mw ERP. Of course you would need to be able to demonstrate that any modified equipment met these standards to ensure you remain legal, something which would likely require some rather expensive test equipment. 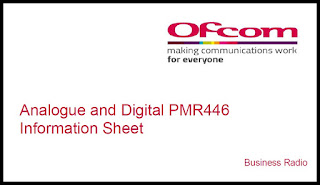 It should be noted that the sub-title of this document says 'Business Radio' which further muddies the water as is it not clear as to whether the document only applies to business users or users in general!
Further investigation need.....
PMR446 also falls under EU legislation and OFCOM are responsible for implementing EU decisions here in the UK, which in the case of PMR446, they have done.
The very latest EU regulations are dated 8th August 2017 and refers to PMR446 following the decision to expand the band from 8 to 16 analogue channels, which was to be implemented across Europe from January 2018: 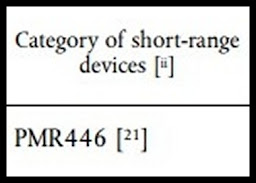 Note that there is a Footnote applied to PMR446 - Number 21, which states:
"PMR446 equipment is hand portable (no base station or repeater use) and uses integral antennas only in order to maximise sharing and minimise interference. PMR 446 equipment operates in short range peer-to-peer mode and shall be used neither as a part of infrastructure network nor as a repeater"

I have a feeling we've seen that somewhere before and we appear to be going round in circles!

So, PMR446 What's Legal?
Not an easy question to answer, I have therefore emailed OFCOM to see if they can clarify the situation.
Specifically I have asked...

"Are people required to use ‘type-approved’, in other words, STANDARD radios as bought from Argos etc, or can they use non-standard radios such as Baofeng etc?"

"Can people modify STANDARD radios in a way which allows detachable antennas, or must the antenna remain FIXED to the radio?"

We await the reply in eager anticipation...
Posted by Delboy at 12:55 2 comments:

Video:YouTube/Paul McGee M0WNU
Paul takes a look at the Thunderpole T-800 radio.....
Posted by Delboy at 10:44 No comments:

Video:YouTube/Jason CT965
A very interesting video from Jason CT965 which shows the construction of a PMR446 Bazooka antenna.
PMR446 has seen a massive increase in use over the recent weeks and this antenna is a very simple way of boosting your output.
Here's a still from the video which gives the relevant measurements for the antenna: 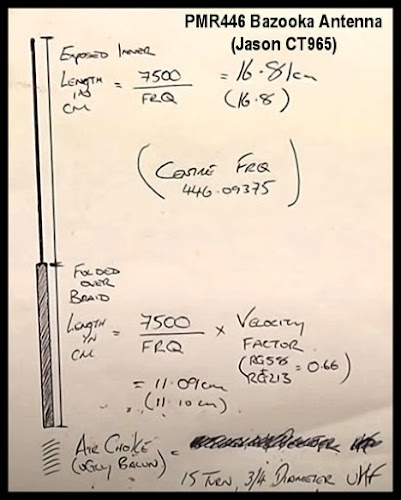 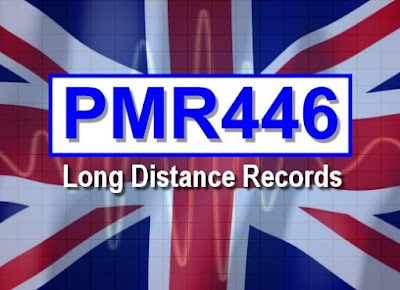 With the recent increase in activity on the PMR446 band here in the UK I wonder if it's time to revisit the idea of  'PMR446 Long Distance Records'.....

Back in the early days of PMR446 there was very little in the way of non-standard radio equipment which could operate on the 446 band. You certainly couldn't get your hands on a Baofeng, so users made do with tiny handhelds, tiny antennas and half a watt of power.... in other words, LEGAL PMR446 radios. But that didn't stop them making some amazing long distance contacts. They just had to put a bit of effort into it by climbing up to the top of a hill or other high spot.

Things are different these days, anyone can order a high power radio from eBay or Amazon including modified Amateur Radio equipment which can be capable of putting out very high amounts of power. You see people boasting online that they made a 50 mile contact...

Well let's be honest, anyone can make a 50 mile contact using a Yaesu/Icom/Kenwood/Baofeng with 50 watts coming out of the back into a co-linear or beam antenna.... It really is nothing special!

What is special and very rewarding is making the same contact on a standard, type approved, PMR446 radio.

How about starting a points system? Maybe one point for every mile achieved between two operators using STANDARD (Type Approved) PMR446 radios.

Personally, back in 2003, I made a 535.8Km (333 Mile) contact using a Motorola T6222 radio. This was during a period of Tropospheric Ducting which allowed my signal to be carried from North East England to a small town near Amsterdam. Of course these conditions don't happen very often and you should not expect distances like that but it just goes to show what is possible. 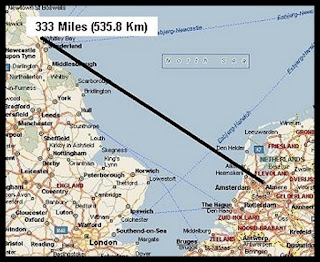 If you get up to the top of a hill or other high spot you should easily be able to make some amazing contacts. You can certainly expect to cover 10-20 miles, and much further depending on your height.

So how about it? Let's see and hear about amazing long distance contacts made using proper PMR446 radios.

Of course we shouldn't leave out those who wish to use non-standard equipment, therefore I suggest we have 2 categories:

CATEGORY ONE: Standard, type approved radios which have NOT been modified in any way.

Obviously a CAT 1 to CAT 1 contact would be the GOLD standard as this is the hardest to achieve.


You could post videos online to verify your contacts and we would be very happy to feature them on the blog.....