Expected in October is the NEW Yaesu FT-991A - Building on the success of the FT-991 the new updated model will feature a REAL TIME SPECTRUM SCOPE and MULTI-COLOUR WATERFALL DISPLAY. (All other specifications are expected to be the same as the original radio)

The original model muted the receive audio when the scope or waterfall display was in use due to the radio only having a single receiver, something that was criticised by many when the radio came out. This update fixes this issue.

Furthermore existing FT-991 users who wish to have the new features will be given the chance to upgrade their radios by means of a hardware update (Price to be announced).

The upgrade is likely just a plug-in board which adds a second receiver to the radio along with a firmware upgrade to make use of the new features. 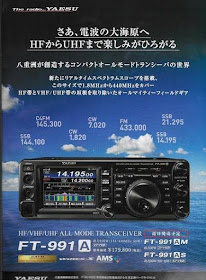